I am a BACP senior accredited psychological therapist and feminist activist. I have been practising for the last 26 years. Before qualifying in 1994, I worked in the women's movement, in a Rape Crisis centre and in Women's Aid refuges for women fleeing domestic violence. I then worked as a counsellor in a non-medical mental health crisis service for 11 years, before establishing the Freedom from Torture North West Centre in Manchester in 2003, where I carried a caseload of torture survivors and managed the centre for 14 years. I currently work as a Senior Psychological Therapist with Syrian refugees in the Syrian Vulnerable Persons Resettlement Programme. I have a private supervision practice and write psychological reports for survivors of torture and other human rights abuses. 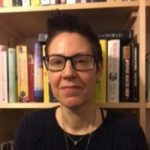